BADMINTON
Senior badminton is a fortnight into its competition with veteran Reiniel Cruz leading his team every Thursday night at Mt Roskill Grammar. Badminton has long been a favourite pastime at St Paul's, so it will come as no surprise that no less than eight players are representing the college on a weekly basis in ABA's mixed grade.

BASKETBALL
Season 2021 is full steam ahead with our six college basketball teams coming to the end of the grading round. It looks as though all the hard work and the trainings before, after and during school hours are paying off with noticeable improvements from the Under 17 team (currently undefeated) and the U15 maroon team. Basketball is now the second biggest sport in New Zealand secondary schools, projected to overtake football in the next few years as the most popular sport in NZ schools. St Paul's College has long been a sleeping giant on the court and it's been exciting to witness the transforming landscape under Ronan Jebb's watch. Not only are our teams improving, we now have qualified coaches on teaching staff, qualified referees amongst the students and several members of the 1st V running basketball programs in local primary schools. Well done to all the students and their families for getting behind the code - whether that be with a scorecard, a referee's whistle or coach's clipboard.

After a few great weeks of basketball at the college, I would like to give some players a particular mention. Byron Toko (1st V), Kaiya Mareva (1st V), Israel Tauti (U15 Yellow), Aukustino Etuale (U15 Maroon) have been excellent with their effort and commitment to the program so far. Well done and keep it up, these students are showing the type of leadership, courage and commitment that we need to take St Paul's basketball to another level.

ABSL Refereeing Course
On Monday 17th May, some of our senior players did a refereeing course which was run by an ABSL referee. The attendees were Orlando Lima, Christian Schaaf, Kaiya Mareva, Lui Villanueva, Byron Toko, Keona Robertson, Ethan Ropati-Delaney and Seth McCarthy.

Auckland Huskies
On Tuesday 25th May, the Auckland Huskies, came to St Paul's. They ran an hour practical session, spent the first break playing 1v1 with school pupils, and then ran a classroom session with the AIMS team called "Life Changers." This was a great experience for the AIMS players and great for the school to meet and play against some pro players. A huge thank you to the Auckland Huskies for this.

1st XIII
The 1st XIII has started its short season in style with impressive victories over Southern Cross campus and the old foe, Kelston Boys High School. Stand out performers have been AJ Jones (Year 12), Jaydee Auloa (Year 12) and two players playing above their weight and age group - Richard Faleono and Sione Siulua (Year 11s). A crucial clash with MAGS looms and beyond that a spot in the semi-finals looks a likely outcome. I know coach Sefo Fuimaono will be working hard, planning for all scenarios with his mature group of footballers. SPL's recent 16-10 victory over KBHS was a great game to watch with athleticism, skill and of equal importance - sportsmanship in droves. Well done to captain Sefanaia Cowley-Lupo and his team mates.

UNDER 15
The Under 15 rugby league team is off with a bang notching up over 100 points in two games! Stand out performers Lucky Kali (Year 10), Steve Moala (Year 10) are always consistent. Braydon Sapolu (Year 10) has also been impressive with his form spilling over into U15 rugby union, where he plays fullback. I've been impressed with his skillset, speed and unselfish play. He is a player to keep an eye on.

1st XV
SPL's 1st XV kicked off the season with a resounding victory over Waitakere College 38-5. Proceedings got underway early with a jersey presentation by Old Boys (including members of the 2020 squad) and an Old Girl. Prior to kickoff, both teams performed impressive hakas - SPL led by Johanas Smith (Year 12). A great effort by the forwards laid the foundations for the backs to unleash their sizzling speed and skill, exhibited in the powerful finishing of Sio Kali (Year 11), Sefanaia Cowley-Lupo and Joe Kau (Year 13s). Captain William Piliu (Year 12) was on target with his boot plus massive contributions by AJ Jones (Year 12), Deputy Head Boy Mark Tautele and debutant hooker Judah Finau (Year 13) who featured in many forward charges. Tama Puletiuatoa (Year 13) was a standout in the line outs. A feature of the game was the many excellent debuts by Delano Atai, Ikaaika Jacobs, Alamoni Tuione, Jonathon Fifita, Taimana Tatana-Simi, Justus Tele'a and Judah Mann. Congratulations gentlemen and thanks to our parents for the incredible aftermatch. Thanks also to supporters and staff for hosting the old boys, including Waitakere's headmaster and SPL old boy - Mark Shanahan.

2nd XV
Our 2nd XV had their first competition game against Dilworth on Saturday. What a game! It had everything - physicality, courage, passion and commitment. The team were leading 6-0 right up to full time when the referee awarded a penalty try.

There were some tears shed at the conclusion of the game which showed coaches Lio Va'auli and Nga Mareva the passion and how much this game meant to the players. Well led by our two co-captains Heneli Luani and Kaiya Mareva (Year 13s) and a stand out performance on defence by young backs John Matini, Nathan Mareva Tumaki and Lucky Kali (Year 10s). Overall, we are super proud of the boys’ effort; the future is bright for this team. Lastly, thank you to all our SPL families for your support.

UNDER 13
The Under 13 team is in full swing having played 3 games in ARU's club competition already. With a large number of boys who are new to rugby, we know we have a lot to learn. All of the player's hard work and dedication so far came to fruition last Saturday with an impressive win over a very large and athletic College Rifles team. It's been great to see the development in our boys and to see future leaders of St Paul's coming through. Stand-outs so far have been Laverneus Nicholas Pita (Year 9) with his blistering pace, Mita Tate (Year 9) with his direction on the field and Lorenzo Ekeroma (Year 9) with his non-stop tackling and storming runs. Thanks also to McCarthy Cocker who has been helping out with the team while also still playing premier Rugby for Ponsonby RFC. We are looking forward to continuing with this form as the season progresses.

SPORTS SPOTLIGHT: SEBASTIAN SMITH
Sebastian Smith has grown up at St Paul's College. Before he was old enough to enroll, he was practicing his kicks on the fields, collecting balls for sport teams and supporting his older brother and cousins from the sidelines.

Sebastian epitomises our college value of "commitment," representing no less than five codes for the college! He is equally hard working in the classroom with a 100% school attendance rate in 2020, backed up with no days off in 2021, his service hours are under way, he plays flute in the concert band, and with this level of commitment to the college, Sebastian is putting his name forward as a leader for the future.

SUCCESS FOR 2019 DEPUTY HEAD BOY
Sione Moala, who not only led his Canberra Raiders team to a grand final win in Australia's SG Ball competition. Sione was also awarded the Coach's award for the season. This will come as no surprise to teachers and coaches who had the pleasure of working with Sione, a mature and focused young man who led by example on the sports field, in the gym and most importantly in the classroom. Well done to the Moala family, we are very proud of your achievements. 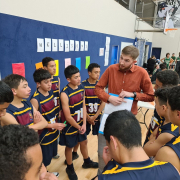 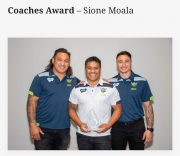